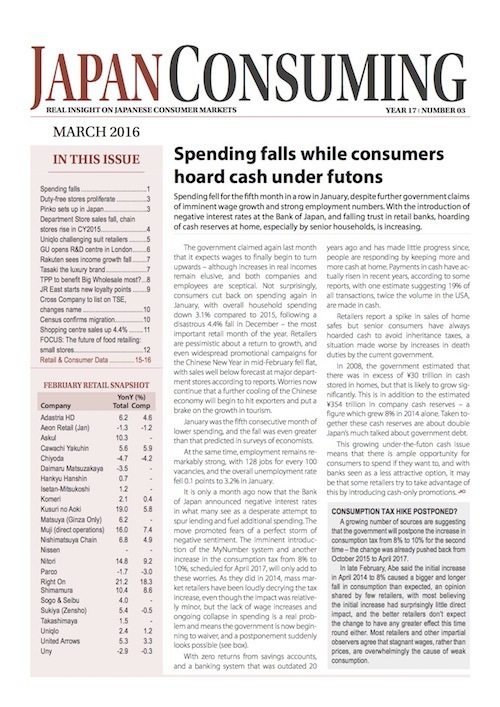 The future of food retailing is small formats. This simple conclusion to the current shake up in food distribution now seems increasingly obvious – and in some ways it is surprising that the trend did not emerge sooner. In the four largest urban areas centred around Tokyo, Osaka, Nagoya and Fukuoka, this shift to small format retailing is expected to strengthen rapidly. In this month’s focus we take a look at some of the main players in small format food retailing located around Tokyo.

Spending fell for the fifth month in a row in January, despite further government claims of imminent wage growth and strong employment numbers. With the introduction of negative interest rates at the Bank of Japan, and falling trust in retail banks, hoarding of cash reserves at home, especially by senior households, is increasing.

The opening of the first duty-free store on the Japanese mainland in Mitsukoshi Ginza was controversial – until then the only duty-free presence in Japan outside of airports was DFS in Okinawa. Mitsukoshi’s store sparked a mix of admiration and opposition, but the idea looks set to stay, with Isetan-Mitsukoshi opening another duty-free store in April and Lotte opening a 4,400 sqm store in Ginza this month and another next year in Osaka.

Pinko sets up in Japan

Italian accessible luxury brand Pinko has set up a Japanese subsidiary and will roll out its first stores this month, with plans for as many as 20 stores here within three years.

Calendar year results for 2015 are in, giving a taste of financial performance before the main end of financial year results due in the next three months. Department store sales fell in 2015, but were held steady by tourist sales in three cities, while chain stores grew for the first time in 15 years, largely due to better performances by food retailers.

La Fabric, which expanded from its online store to its first store in Shibuya last month, and Uniqlo, are challenging Japan’s main suit retailers with new services for semi-custom business wear. La Fabric uses IT and efficient logistics to offer high quality, customised suits, while Uniqlo is using its considerable economies of scale and brand position to sell semi-customised suits and shirts. Aoyama Shoji will begin its own custom order suits service this month, but the new players represent a genuine threat to the strength of the big chains in this concentrated but shrinking market.

GU has worked hard to create its own distinct supply chain separate from sister chain Uniqlo, with many more SKUs and much shorter lead times. To improve merchandising further and respond more quickly to fashion trends, as well as prepare for international expansion, it has set up a new research office in London.

Rakuten remains Japan’s biggest e-commerce company by a long way, but impairments in goodwill valuations on multiple international acquisitions meant income growth fell last year. The company remains strong on the financial services side, but faces increasing competition in the core shopping portal business. While the portal will continue to expand, it is likely to become less important in the medium term as Rakuten expands and prioritises consumer services.

There are few Japanese luxury brands of any scale, but jewellery business Tasaki is cautiously creating its own.

TPP to benefit Big Wholesale most?

Japan’s food distribution industry is eager to see the much-lauded TPP talks come to an end and begin a new era of cheaper food imports. After more than 15 years of expansion beyond importing and food processing into food wholesale and retail businesses, the Sogo Shosha look to be most likely to benefit – and significantly so at that. Retailers and consumers may well find that their own benefits are much less significant, although there is the tantalising possibility of Walmart at last being able to fully leverage its global supply network.

JR East has launched a new loyalty points scheme that will eventually amalgamate some 24 different programmes now in place for its various payment cards and shopping buildings. The new JRE Point cards were immediately available at Atre buildings, and will be rolled out to the rest of the group over several years. With 11 million expected sign-ups and unusually generous payback levels, the new scheme is a clear threat to T-Point and Rakuten Super Points.

Cross Company has been one of the most successful fashion retail stories of the last two decades, growing faster than its peers, and breaking new ground through innovations such as a fair trade fashion chain and a clothing rental subscription service. It will now list on the TSE, and use the funds to expand into new categories both at home and abroad.

Japan’s Census of Population for 2015, carried out every five years, showed the first decline in population on record. This news didn’t surprise anyone, but the increase in migration did. While the population has declined across the country due to natural erosion from deaths and low birthrates, the Tokyo region continues to grow, with seven more of Japan’s 47 prefectures also increasing at the expense of the rest. The growing shift to major cities remains a key trend for brand marketers and retailers.

Shopping centre sales grew last year thanks to new SCs and expansion and renewal of existing malls, but sales were flat on a same store basis. As with department stores, the gap in performance between SCs in or near major cities and the rest is growing.

Women still struggle in the workplace

Minami Machida to get major development

Companies and Brands in this Issue (No. = Page Number in Report)