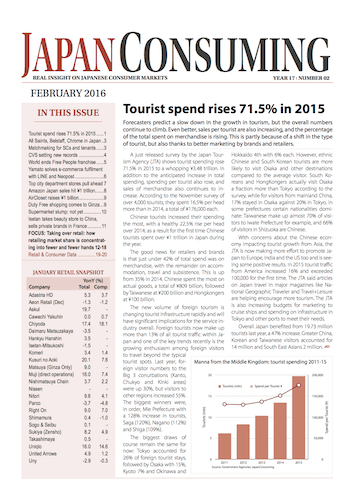 FOCUS
Taking over retail: how retailing market share is concentrating into fewer and fewer hands
Japanese retailing was traditionally a fragmented, complex jigsaw, with multiple competing formats and multitudinous players within. Today, retailing still looks complex and highly competitive, but in the past five years, there has been a dramatic increase in market share concentration, not just by big retail groups but also by Sogo Shosha and other large corporate interests. The impact on foreign brands and retailers is significant given the propensity of these groups to both lock out new competitors, and use their increasing scale to implement vertical supply chains and increase sales of their own private brands. On the other hand, a good relationship with one of these new behemoths can mean potential sales across a massive network of stores.

Tourist spend rises 71.5% in 2015
Forecasters predict a slow down in the growth in tourism, but the overall numbers continue to climb. Even better, sales per tourist are also increasing, and the percentage of the total spent on merchandise is rising. This is partly because of a shift in the type of tourist, but also thanks to better marketing by brands and retailers.

Overseas brands All Saints, Belstaff, and Chrome set up in Japan
More fashion brands are setting up shop in Japan this Spring. Two, All Saints and Belstaff, are from the UK, Moynat from Paris and another is Chrome from the US. Leading distributor Bluebell Japan will open the first store for natural cosmetics brand, Burt’s Bees.

Matchmaking for SCs and tenants
Finding great tenants is time consuming and while ambitious retailers know where they want to expand, they often don’t have the connections to get a look in. A new service aims to solve this through a matchmaking site.

Convenience stores setting new records as Seven Eleven announces 1,800 new stores in 2016
Seven Eleven continues to expand, outpacing all of its rivals, although all three major chains continue to break their own records in terms of performance. Now, Seven Eleven will add another record number of stores this year, averaging six new stores every single day. The aim is to build volume both to stay ahead, and to create a logistical base to supply the last mile of its new omnichannel supply chain. Rivals are trying to keep up.

World ends Free People franchise
World has rarely tied with another business, let alone foreign retailer, so its franchise agreement with Urban Outfitters’ Free People chain in 2013 was a surprise. Communication was always going to be complex, but World’s decision to prune its brand portfolio and close 500 stores has ended the Kobe firm’s experiment with internationalism. This leaves Urban Outfitters one of the few major foreign fashion retailers without a presence in Japan.

Yamato solving e-commerce fulfilment with LINE and Neopost
Yamato’s YES! e-commerce fulfilment and delivery business is growing strongly according to the company itself. Last month it announced a new tie-up with LINE, Japan’s most popular messaging service, to provide a new layer of digital services to support both customers and its own logistics system.

Department stores in top three cities pull away from the rest
Department store sales fell 0.1% on a same store basis in calendar year 2015. Stores in some cities did well, especially Tokyo, but outlying stores faced continued tough trading because of a downturn in apparel spending, and some even saw sales fall sharply in fresh food as customers looked for cheaper, lower end alternatives. Apparel sales also continued their worrying downward trend, and more needs to be done to improve fashion floors. Fortunately the boom in home decoration saw furniture sales jump 8%, at least in major cities.

Amazon Japan sales hit ¥1 trillion
Amazon Japan continues to introduce a dazzling series of new initiatives to both beat and exceed competitors. With the looming threat of Seven & I’s omnichannel ambitions, a wider range of product categories, more brand specialisation, and new, rapid local delivery services are the key areas that have pushed the company to become the first ever ¥1 trillion overseas retailer in Japan.

Fashion rental service AirCloset raises ¥1 billion
AirCloset helps those who like fashion but lack the confidence to try out new styles to learn what suits them. It has a team of stylists who select what they think suits a particular user and rents the items for as long as she wants, a great way to discover new brands and a useful way for overseas brands to reach new customers.

Duty Free shopping comes to Ginza
The first duty free shop on mainland Japan opened late last month in Mitsukoshi Ginza. Apart from DFS Okinawa and the airport stores, this is a unique store and an idea that is likely to boost sales at any department store canny enough to open one.

Rising food prices hurt consumer confidence, GMS chains hit hardest
Japan’s largest retail association by member sales warned of a growing slump in consumer spending last month. The reality may be more to do with key member GMS chains hoping to reduce expectations before their end of year financial results. There are some worries, however; with food expenditure as a percentage of household budgets at its highest in 30 years, the impact is being felt in other consumer product categories too.

Isetan takes beauty store to China, sells private brands in France
Not content with having the most innovative expansion strategies at home among department stores, Isetan-Mitsukoshi is now using its growing confidence in small format retailing and brand development to push into overseas markets.