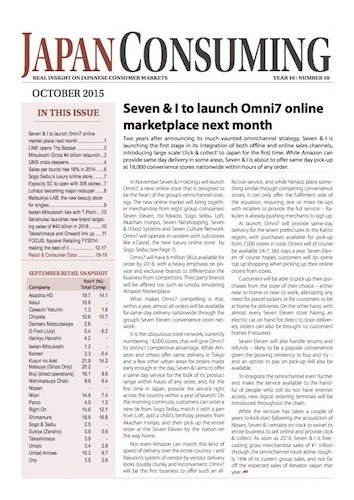 FOCUS: Apparel Retailing FY2014-15: making the best of it
Apparel retailers entered FY2014 with a good deal of worry about just how long consumers would stay away from stores after splurging before the consumption tax increase. The good news was that for many the second half of the year was positive, and by the end of the year, losses had been recouped. As a result the sector ended just ahead of FY2013, a very resilient performance in the face of tough challenges. The biggest 100 retailers increased their share yet again reaching nearly 66% of the entire apparel market, but growth also came from very promising chains only a few years old.

Seven & I to launch Omni7 online marketplace next month
Two years after announcing its much vaunted omnichannel strategy, Seven & I is launching the first stage in its integration of both offline and online sales channels, introducing large scale ‘click & collect’ to Japan for the first time. While Amazon can provide same day delivery in some areas, Seven & I is about to offer same day pick-up at 18,000 convenience stores nationwide within hours of any order.

LINE opens Trip Bazaar: a new route for brands not yet sold in Japan
LINE is expanding its online retail operations through a new social shopping function, offering opportunities for overseas brands to target the Japanese market. The LINE messaging app will act as a social shopping platform, allowing users to digitally window shop for carefully selected brands not currently available at home.

GMS crisis deepens: top chains announce store closures
It is no secret that the general merchandise store (GMS) sector is past its prime, but recent results suggest the crisis is only getting worse. Last month two of the largest chains announced store closures, following on from similar announcements from Seiyu. Aeon too is looking to restructure its operations. Is there any chance the sector can emulate department stores and turn things around? Things do not look good.

Sales per tourist rise 18% in 2014 as tourism surges
Everyone knows that tourist spending is booming, helping department stores in particular offset weaker domestic spending on discretionary items. But how much each tourist spends and what they spend it on is harder to define. A recent survey of 13,000 tourists helps to shed light on Japan’s great Tourist Dividend; while Chinese dominate in both numbers and average spend per person, it is the French and Indians who then spend the most.

Sogo Seibu to launch luxury online store, e.Castel
Seven & I has authorised large budgets for any group retailer that comes up with projects to help in its efforts to become Japan’s first true omnichannel retailer. The latest is a luxury online store from Sogo Seibu with its own branding.

Expocity SC to open with 305 stores
In November Mitsui will open its biggest Lalaport shopping centre and the largest single SC in the country to date. The Expocity Lalaport will open in northern Osaka. 2015 marks 35 years since the first Lalaport opened and this year has been the busiest yet in terms of SC openings.

Lohaco becoming major netsuper
Lohaco, Askul’s online shopping site aimed at the general consumer market, is fast becoming a significant competitor for the likes of Amazon and Seven & I. Backed by Askul’s considerable experience in non-store retail, Lohaco took a further step this summer by introducing a major update to its smartphone shopping app. The app has been heavily researched to target busy female shoppers, introducing a magazine style format as well as easy search and detailed purchase and browsing history.

Matsukiyo LAB: the new beauty store for singles
With all the major drugstore chains introducing new value added services in efforts to compete in the increasingly saturated sector, last month the leading chain, Matsumotokiyoshi, added to the competition with the first of an entirely new format. Matsukiyo LAB is aiming for 50 stores within five years, targeting single person households in urban areas with a large range of beauty, health and lifestyle merchandise.

Senshukai launches new brand targeting sales of ¥40 billion in 2018
Following J Front’s investment, Senshukai is working hard to realign itself as an omnichannel retailer. With close to 80% of sales coming from online, and a legacy supply chain reliant on wholesalers, this is a challenge, but it is now launching new brands designed for both store roll out and online sales, all with direct sourcing. The first is Belle Maison Days.

Takashimaya and Onward link through online & stores
Takashimaya and Onward have launched a collaboration that allows sales assistants in Onward’s brand concessions to order unavailable items directly from Select Square, Takashimaya’s online store. For Onward, this means more flexibility in merchandising and better use of limited space. For Takashimaya it expands the options for omnichannel services and provides an opportunity to better serve its regional customers.

INDEX: COMPANIES/BRANDS IN THIS ISSUE (number = page no.)