Strong sales at department stores and select shop chains mean demand for premium overseas brands continues unabated. This benefits not only the brands themselves, but also distributors, leading to a resurgence in activity, even among former dullards of the industry like Toray Diplomode. Others such as Look are going from strength to strength.

Demand for quality overseas fashion brands is seemingly insatiable, even with a weak Yen and pressure from department stores on margins – while 70% margins are the norm for import brands at retail, some department stores are forcing 60% on smaller businesses.

Worries over the sustainability of department store sales is a concern, but one that may be fast dissolving. Although there was a spike in department store and select shop sales prior to the tax hike, the longer term trend suggests consistent levels of demand from affluent consumers. While real incomes are falling (see Page 5), economic and political trends within and without Japan suggest stable levels of wealth among higher income segments. As a result, importer-distributors are optimistic about their prospects, despite the exchange rate.

Look, one of the leading overseas brand distributors currently, has signed a major new deal with US bag and accessories brand Vera Bradley. As is common for Look brands, Mitsubishi Shoji will be the importer and Look will handle day to day wholesale and retail operations. Mitsubishi Shoji has been instrumental in Look’s resurgence in the last five years, and provides financing for brand investment, as well as sourcing retail locations through Mitsubishi Estate. Vera Bradley is famous for its colourful quilted cotton bags in flower and paisley prints, with about 50% of sales from handbags and totes, and 30% from stationery and accessories. Look will begin distribution from this Autumn with handbags retailing for about ¥12,000. It plans to invest in two retail stores before the end of the year, and expects 25 stores by 2019 and sales of ¥3 billion – about 6% of Vera Bradley’s current global sales. Look is one of the most proactive investors in stores for its brands among Japanese distributors.

Itochu Shoji’s latest distribution deal is with Italian womenswear label Forte_Forte, which will be distributed by its subsidiary Coronet. Targeting women aged 30-50, Forte_Forte was founded by Paolo and Giada Forte in 2002. Dresses will be priced at ¥50,000-70,000. Coronet continues to seek out new brands and, as well as recently signed Eastpak, wants to add a further five brands in the next year with a focus on bags, shoes, jewellery and other accessories.

Meanwhile, US denim brand Joe’s will see its womenswear line distributed through Toray Diplomode from S/S 2015. The deal has been done through Itochu Shoji which has had the rights to the brand since 2003. Until now Joe’s was distributed through Itochu affiliate Caitac International. As well as the ‘Women’s Denim’ line, Toray will sell outerwear and tops under the label, ‘The Collection-Women’s’, with prices of ¥23,000-40,000 for denims and ¥15,000-40,000 for apparel. Sales will be through department stores and select shops to start with, but dedicated ‘Joe’s Womens’ stores are planned for 2016 and on.

Toray Diplomode, a once sleepy subsidiary of the material giant Toray, saw sales jump 26% in FY2013 and will now expand further. The recent growth in sales comes both from new brands as well as much better results from its existing brands, which have benefitted from more investment in stores.

In the last year Toray has signed three brands: Vanessa Bruno from Paris, Fleurs de Rhum (it already distributes sister brand Chacok), and Blue Les Copains. Its other brands include Tracy Reese, Vince and U by Ungaro among 11 under management. Vince is now a ¥1.4 billion business after four years with Toray, and saw its first store outside the US opened last October in Tokyo. Toray plans 20 Vince stores and corners within the next three years.

Another long-established importer, Ueno Shokai, is also hoping for a comeback. From this Autumn it will start distribution of Gant’s premium line, Gant Rugger, and expects sales of ¥1 billion within three years. Gant is signed to Nippon Steel Sumikin Bussan, but Ueno Shokai has agreed a sub-distribution deal with the trading firm. Ueno Shokai will open the first store in Harajuku this month.

Nippon Steel & Sumikin Bussan itself has signed an exclusive distribution deal with US accessories business Alex and Ani with sales starting from this Autumn. Founded in 2004, the jewellery collection is now sold from 2,000 doors in 11 countries with 40 of its own stores in the US. Thanks to popular themes such as its emphasis on use of recycled materials and local manufacturing (‘Made in America With Love’), sales have risen to US$230 million from US$2 million in 2009. Alex and Ani has also introduced innovations such as a sliding clasp that allows one size of bracelet to fit all wrist sizes. Prices in Japan will be ¥3,000-5,000. Four pop-up stores will open this Autumn, including Sogo Yokohama and Seibu Ikebukuro, with a rollout to department stores and station buildings next Spring as well as wholesale to select shops.

Itokin is hoping a renewed emphasis on imported brands will help a revival in the company’s fortunes. From this Autumn it has started distribution of French brand Tara Jarmon, including a licensed second line to be launched in S/S 2015. Tara Jarmon was under contract to Sanki Shoji until 2009. Five department store concessions will be opened this Autumn and then 15 more next Spring. Around 70% of merchandise will be imported and 30% reproduced with Japanese sizes. For the licensed line 80% will be made by Itokin.

In the Spring Sanki Shoji itself began distribution of women’s bags from leather bag brand Borbonese and from S/S 2015 will add the men’s line too. Prices of ¥80,000-200,000 have been set for the trademark suede handbags, but a new line of synthetic fashion bags have just been introduced with prices of ¥30,000-90,000. Sanki hopes for sales of ¥1 billion within five years.

Sanki also recently added Bamford, a British brand of clothing and spa products with an emphasis on fine, natural fabrics and ingredients. Bamford is a departure for Sanki, which has focused largely on Italian brands in the past, but is now adapting to changing demands from department stores and searching for new kinds of brands, especially in accessories. Competitors like Aoi and Misaki Shoji have signed more labels in the last year too, and are also scouring Europe for up and coming designers and brands.

Similarly, Mitsui affiliate Sann Freres has agreed a deal with Fay, a fashion label owned by Tod’s. Fay has been managed by creative team Aquilano-Rimondi since 2011. Sann Freres will start distribution from S/S 2015 to department stores and select shops, targeting men and women in their 40s. It expects sales of ¥800 million in year one rising to ¥2 billion through 2017 when a flagship store is planned.

In jewellery, Island, which owns the Grace Continental brand, began sales of US brand Brooklyn Charm this summer. Brooklyn Charm began as an internet supply business selling chains and charms to customers wanting to make their own custom jewellery. It has since created a retail store where customers can delve through charms ranging from colourful skulls to stars and moons, to match with its range of chains. Island has already opened stores in Harajuku and Lumine Shinjuku, with prices from ¥100-3,000 and a completed accessory costing around ¥6,000.

Finally in the outdoor market, the specialist hiking and mountaineering goods distributor Caravan has just re-signed German brand Jack Wolfskin – it had been the distributor for Wolfskin until 2008 but lost the contract temporarily. Caravan will start with wholesale sales with a target of ¥300 million in year one, and then open two stores in late 2015.

The buoyancy in the import brand market is also encouraging further investment in high spec stores. Yagi Tsusho will open a stand alone store in Aoyama this Autumn for French bag and accessories brand Jerome Dreyfuss. A new store for J&M Davidson is also slated for Aoyama. Over in Cat Street in Harajuku, Yagi will open a store for popular outdoor clothing brand Woolrich. Last September Yagi also signed Italian scarf brand Faliero Salti and will open a flagship in Aoyama this Autumn to firm up the branding, as well as more corners in department stores. It will also introduce a premium line for Faliero Salti from this Autumn using cashmere and lace.

Hats, scarves and coats: finding a market in Japan

Burberry could triple stores to 55 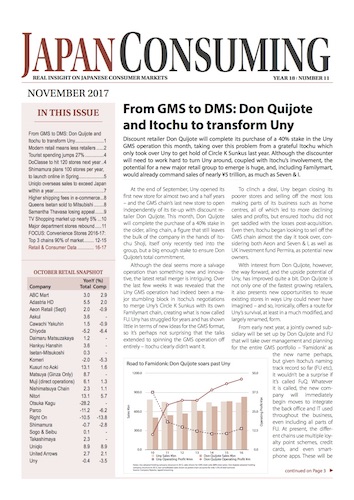